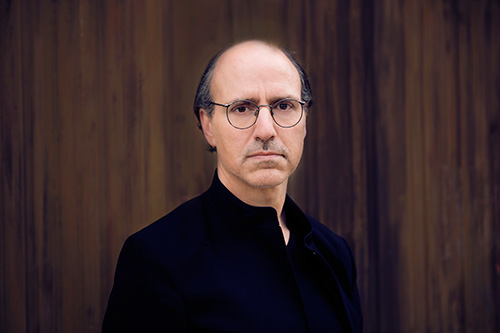 Prodromos Symeonidis was born in Thessaloniki, Greece in 1972. Apart from music, composition and the piano, which were his constant companions from early childhood, he also had a great fondness for mathematics and astronomy. As a youth, he won many prizes at national and international contests for mathematics, including a bronze medal at the 30th International Mathematical Olympiad in 1989. In 1990 he moved to Germany, where he pursued and completed his piano studies in Munich, Cologne and Berlin under Michael Endres, Karin Merle, Arbo Valdma and Georg Sava. Besides piano, he participated in composition seminars under Krzysztof Meyer and Walter Zimmermann. Parallel to his studies, he also worked with Yvonne Loriod-Messiaen, Claude Helffer and Dimitri Bashkirov.

His international piano competition successes have led to concerts in many famous halls throughout the world, like the Konzerthaus Berlin, Philharmonie Berlin, Philharmonie Essen, Sendesaal Bremen, Tonhalle Düsseldorf, Opéra National de Paris, Opéra Comique de Paris, Arsenal de Metz, Seoul Arts Center and Hangzhou Grand Theater. He made recordings for the radios SWR2, Radio Bremen, France Musique and RCF Orléans as well as the german label Telos Music, which were highly praised by the international press like FAZ, Fanfare, Pizzicato, Piano News, ResMusica and ConcertoNet. Aside from his activities as an interpreter, Prodromos Symeonidis is a composer and teacher. He has composed himself several solo and chamber music pieces and has been invited to give masterclasses and lectures in the contemporary music centre Acanthes (formerly in Metz), the Conservatoire Royal de Liège, the Hochschulen für Musik Hannover and Hanns Eisler Berlin, the Universities of Virginia and Miami, the Soongsil University in Seoul and the Music Conservatory of Xi'an.